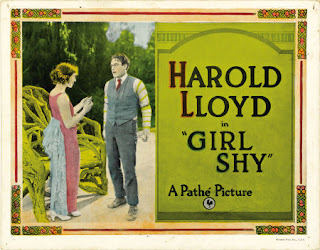 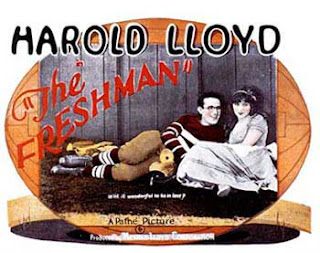 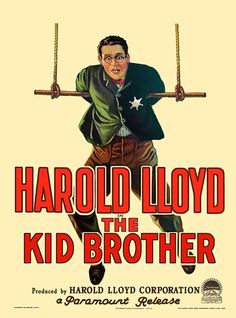 My local library recently added a free film streaming service to its online resources. Because it is meant to be an educational resource, the service has a great deal of early cinema classics, as well as foreign language films. This, naturally, suits me perfectly. A large number of Harold Lloyd films are included, and seeing as he appears briefly in the 1001+ list, I thought I'd check them out.

I can see why Lloyd was such a star; he is incredibly likeable. While he started his career imitating Chaplin's tramp character, Lloyd went on to develop his own persona. Where Chaplin is Dickenesque in his exploration of poverty through his tramp, and Keaton is stony-faced as he deals with the chaos going-on around him, Lloyd's Harold plays with ideas of masculinity. In Girl Shy he is just that, playing a tailor unable to speak to women without a considerable stutter; The Freshman follows Harold's attempts to be popular at college, using quirks he has copied from a film; and in The Kid Brother he is referred to as the boy of the family, and his often compared to his burly brothers and father. He even does the domestic work in the house. This underdog status, along with his sweet, shy smile, make him a rather adorable romantic lead.

Like Keaton, Lloyd was renowned for his athleticism. He scales the branches of an immensely tall tree just to keep his beloved in sight; he gets constantly tackled by football players; and in Girl Shy performs one of the most impressive chase scenes in film history. These three films cast him alongside Jobyna Ralston: they were in six films altogether. They have great chemistry, and Ralston sometimes gets to be part of the joke, not just the object of desire.

Only one of these films is included on the 1001+ list - The Kid Brother - the only entry from Lloyd's filmography. This is a shame, because any one of these, along with Safety Last! could be included; they are all funny, clever and impressive, showing the joys of silent comedy as brilliantly as Chaplin and Keaton do too.
Posted by Julia Mac at 00:34