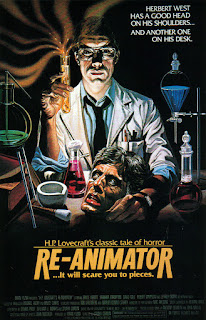 I love it when a horror film goes utterly crazy. It is both horrifying and hilarious, leaving you almost breathless with glee. Re-Animator, with its short running time, goes brilliantly mental very quickly (I'd say somewhere around the re-animated cat), and just when you think it can't get more ridiculous, it does.

Jeffrey Combs is perfect as the 'mad scientist' Herbert West, whose invention - a reagent that reanimates people - has horrible side-effects on the reanimated corpse. He is obsessively focused on his invention and can't help using it, even when doing is a really bad idea (like reanimating he man trying to take credit for his invention). Combs' West's bluntness and inability to suffer those he sees as foolish make him appear almost the most sane, or at least calm, character in the film.

The story follows West as he tries to fine tune his invention in America. He takes up with a follow medical student, Dan Cain (owner of the cat), and somehow Dan's girlfriend Megan's father ends up as one of the corpses. Into the mix is West's nemesis Dr Hill, who also has a thing for Megan. The film's ridiculous plot adds another layer of humour.

The other great element of Re-Animator is its opening titles sequence and theme, which is iconic enough to be parodied in The Simpsons. It is reminiscent of Psycho, and points to the coming madness and chaos of the story.

Re-Animator has everything one wants in an 80s cult horror film: humour, gore, an iconic central performance, a brilliant theme, and a nice chilling ending to round it all off. Great fun!
Posted by Julia Mac at 06:07