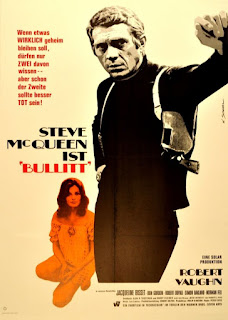 Bullitt feels likes a precursor to 70s films like The French Connection and Serpico, with its bleak approach to police work. Frank Bullitt, a policeman who is popular with the public and the media in San Francisco, is choosen to protect a Chicago defector. The man, Ross, gets killed, and Bullitt finds himself pursuing a major case of subterfuge. The plot allows for several exciting chases, including one of the most famous car chases in film history.

Steve McQueen really was one of the coolest guys to move across a screen. He was never a demonstrative actor, and here his understatement works well. You can feel the frustration building in Bullitt through the smallest flickers across his face. The other great character in this film is San Francisco, particularly during the famous car chase scene (despite it ending outside the city). Those famous hills and streets add a different feel to the chase, breaking the long scene into two parts (the second on a highway).

The editing in this film puts many modern chases to shame. It lingers a little longer with its shots, letting the audience feel motion of the cars dipping up and down the hills, and it helps elongate the tension of the whole scene over 11 minutes.

While this film does point to the bleakness of the 70s, its jazzy, snazzy soundtrack is pure 60s, and it is another element that makes this film so enjoyable. Really, look it up and listen to it; you'll imagine yourself walking around San Fran in the 1960s, or gliding around in your car, with a stylish coat on, and a hard stare searching out trouble.
Posted by Julia Mac at 06:25