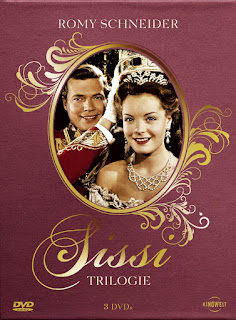 This trilogy of films follows the early career of the Empress Elizabeth of Austria, known to her family as 'Sissi.' The first film, Sissi, is about Sissi meeting and falling in love with the Emperor Franz Joseph I, her cousin, and coming into conflict with her aunt and subesequent mother-on-law, Sophie. The second film, Sissi -The Young Empress, is again about further problems between Sissi and her mother-in-law over who looks after Sissi and Franz's first child. Sissi - Fateful Years of an Empress sees Sissi suffer from TB, while also helping her husband forestall war with Hungary.

The plot for each film are not that different; each features a plotline involving Sissi and Franz renewing their love for each other after separation, and Sissi and Sophie disagreeing about something, with Franz in the middle. The real draw with this trilogy is the look of the films. They were filmed on location in Austria, one of the most beautiful countries in Europe, both in terms of its buildings and its landscape. Winter barely features in any of the films; everything is so summery and lush. The costumes are also gorgeous to look at.

Romy Schneider is a very pretty, sparkly and even sparky empress, and the actor's real mother Magda Schneider plays Sissi's mother Ludovika, adding extra sweetness to their scenes. I recognised the man playing Franz, then realised it was Karlheinz Bohm, who I knew from Peeping Tom. He is a much happier man here.

Marischka had planned to make more films in the Sissi series but Schneider was sick of playing the character, so the story doesn't go into the more interesting parts of her later life. While I really enjoyed these, I do understand Schneider's wishes to leave off being Sissi: it is not the most meaty of roles, and she risked being type-cast.

If you like period dramas or romances, you will enjoy this. And if you want to watch them at the right time, see it at Christmas, along with Germany and Hungary where the trilogy is its a Christmastime staple.
Posted by Julia Mac at 21:49