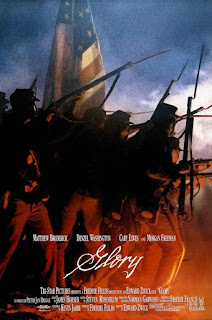 The best films about history are often the ones that explore a little known event or character. Glory is about an all-black regiment during the American Civil War, naturally fighting on the Union's side. They were led by Robert Shaw, a young white man whose family were abolitionists, played in the film by Matthew Broderick. Most of what I know about the American Civil War is from films and the occasional reference to it at school, so this story was entirely unknown to me.

The main issue I had with the film, and which critics also mentioned in their reviews, was that the film about an all-black regiment had a white man as its protagonist. That is not to say that Captain Shaw is an uninteresting figure, and his choice to captain the regiment and train them is certainly commendable. However, it would have been interesting to have the story told from the perspective of ones of the soldiers. Shaw's friend Thomas Searles, a black man and scholar who was the first volunteer, would have been my choice. Despite this though, the film does give a lot of time to the soldiers, and follows a rather diverse group, two of whom are played by Denzel Washington and Morgan Freeman.

I really liked Zwick's film. The performances are all top-notch, not surprising with its cast, and they all get moments to shine. There is a particularly moving scene around campfire the night before the Fort Wagner charge, where the soldiers speak about why they are fighting and comfort another's fears. Like so many war films Glory expresses sadness at the monumental loss of life of the country's men, though here there is the idea of fighting for something greater, so it is not exactly an anti-war film.
Posted by Julia Mac at 00:50