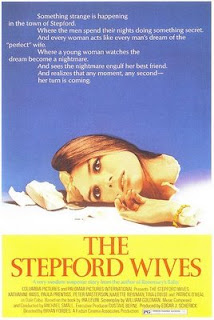 When I watched the horror film Teeth, about a girl with a set of teeth in her vagina, I wondered how I'd react differently to the film if I were male. I found that film rather funny, and certainly enjoyed Dawn's exploration of her newfound power, but could imagine that the laughs coming from a man watching the film would be accompanied by winces and sympathetic leg-crossing for Dawn's victims (despite deserving punishment). With The Stepford Wives I often joined in the fear and rage of Katherine Ross's Joanna as she and her friends uncover the awful secrets beneath Stepford tranquility. But I was also curious as to what feelings the film would evoke in a man?

I'd imagine almost all would find the behaviour of the spouses in the film repulsive, but would it raise any conflicting feelings as well? Of course it all comes down to the individual's approach to women, but it is something I would be interested to learn.

As to the film itself, parts of it are dated, being made and set in the 1970s, but for the most part the film still feels very relevant. The 'Stepfordised' wives speak like women out of commercials - something that seems to have blighted internet discourse - and are sexually compliant, telling Joanna and Bobbie that their relations with their husbands are just perfect! The men themselves are perfectly happy with their wives, and even Joanna's husband only expresses a vague regret at what is going to happen - but does nothing to stop it, or even warn his wife.

While it is light on the normal horror tropes of blood, scares and only has one scene in a dark, spooky house, The Stepford Wives is one of the most horrifying films I have seen. Its story of a person losing autonomy over their mind, and consequently their body, is a universal one, and it is obvious why Jordan Peele looked to Forbes' film when he made Get Out. Enslavement to a society that values freedom is truly terrifying.
Posted by Julia Mac at 06:01