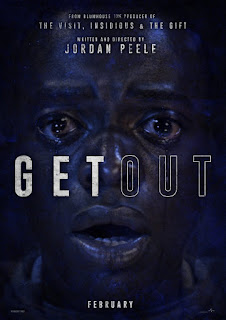 Australia finally got the chance to see Get Out, after listening to all the praise it received around the world. Comparisons to Rosemary's Baby and The Stepford Wives, two of the most unnerving films I have seen, only whetted my appetite to see Peele's directorial debut. Thankfully, the film lived up to its reputation.

The only quibble I had was with the audience with whom I saw the film. Peele's film is very funny as well as frightening, but those sparsely seated around me didn't seem to raise even a chuckle; so I was left to smile to myself.

The story follows Chris as he meets his white girlfriend's parents, who live in a white upper-middle-class suburb on a large expanse of land. They appear to be extremely nice, but something is definitely off; a feeling Chris' best friend Rod warned him would happen. Things start to escalate when Rose's mother hynotises Chris (to help him give up smoking, apparently), and even more when Rose's parents invite their friends around for an annual party, and the guests say some very weird things to Chris. We start to realise something very sinister is happening behind all the liberal bonhomie.

Peele has directed a very sophisticated and clever horror film which feels very timely. The actors are all great, and the casting of Bradley Whitford, famous for his turn as Josh Lyman in The West Wing, is genuis. Catherine Keener is fantastic as Rose's mother, and the hypnosis scene between her and Daniel Kaluuya's Chris is brilliant. Allison Williams really sells Rose's bewilderment at her parents weirdness around Chris, while Kaluuya plays Chris with bemused humour that turns to fear and anger as the horror increases.

This is a wonderful example of intelligent horror, with a bit of comedy thrown in. It would make a perfect companion piece to the Ira Levin adaptations mentioned at the top, and even reminded me of Robert Townsend's Hollywood Shuffle in its satire on how white people portray black people.
Posted by Julia Mac at 05:49