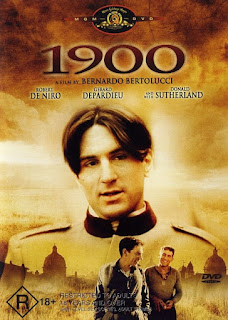 In 1001 Films, the write-up for Bertolucci's film says it is 'not meant to be entertaining.' I don't require all my films to be entertaining, but devoting 5 hours of my time to a film that makes me work to engage with it it a tall ask. While not without some interesting points, 1900 was a film I finished simply so I could cross it off my list.

As I said, it is not all bad. The cinematography is rather beautiful, taking full advantage of the golden light of rural Italy. The greens and golds of the fields pop on screen, and there is an earthiness to the story, with many shots of animals (though I had to look away from the slaughter scenes). The performances are not bad either, though the English dubbing is distracting. Robert De Niro, Gerard Depardieu and Donald Sutherland are all good, though that is probably down to their being great actors rather than their playing compelling characters.

Almost everyone in this film is hard to like, being either too selfish or too wedded to their own political ideals to really connect with one another. The most human parts of the story are of Alfredo and Olmo's childhoods, where their friendship crosses the class divide. Spending five hours with unpleasant people is no fun.

This film was removed from recent editions of the 1001 films list, and I can see why. Its not as great as some of the films on the list and even less then some that have never been included. If you are a fan of Bertolucci's filmography, it is worth seeing, or if you are interested in representations of Italian political history on screen. I am not, and would much rather spend five hours watching Abel Gance's Napoleon, if I need a political history epic. Or Luchino Visconti's The Leopard.