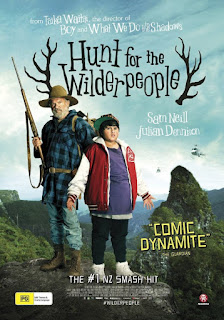 This comedy adventure drama follows a young foster kid called Ricky Baker, who goes on the run with his foster father "Uncle" Hec in the New Zealand bush when child welfare come to take Ricky away. Ricky is a kid from the city, who wants to be a gangster, while Hec just wants to be left alone, and mourn the death of his beloved wife Bella. Instead they find themselves dodging aggressive hikers, wild hogs, and seemingly the full force of New Zealand's police.

One could easily run out of words to praise this wonderful film. It is extremely funny, with all the quirk New Zealand humour is famous for (in Australia at least!); but it also knows that great comedy often comes out of very serious situations. Both Ricky and Hec are outsiders in society: Ricky is a foster kid who has known a lot of sadness, while Hec's past casts him as a dangerous man in the eyes of the law. Bella's death, which happens early on in the film, is heartbreaking, and her presence is felt throughout the whole.

Because it is set in the New Zealand bush, Waititi's film looks incredibly beautiful, much more than most modern comedy films do. The echoes of the scenery in Peter Jackson's The Lord of the Rings trilogy are brilliantly alluded to in a few scenes. The dialogue is wonderful. Bella writes a hilarious song "Ricky Baker" for Ricky's birthday (which also plays over the end credits, so you will end up singing it), and Ricky makes up haikus to help express his feelings.

Sam Neill is lovely as the cantankerous Hec, and he and Julian Dennison have great chemistry together. Ricky could easily have been an annoying character, but Dennison is so darn charming that you can't help but love him.

As I said, you could wear out a thesaurus trying to describe the joy that it Hunt For the Wilderpeople. Thankfully, the film itself has its own word for such an event: majestical. Just watch the film, and you will understand.
Posted by Julia Mac at 23:58