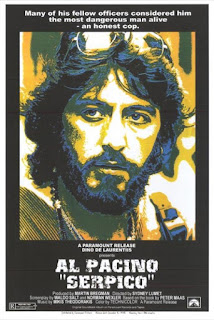 'Rogue' cop stories mostly make-up the narratives of TV police shows, and usually involve a copper who defies authority and does his own thing (the more unorthodox the better). In Serpico, Pacino's Frank Serpico stands out for his anti-corruption stance, and his desire to do things by the book. His colleagues take against this, and Frank finds himself under pressure to just take the bribes and look the other way.

This is my favourite Al Pacino performance. Playing a real person comes with many pitfalls, but Pacino is able to make Serpico a recognisable person, and just the type of policeman you would want on the streets. Serpico excels as a plain-clothes policeman, seemingly getting right into character. As this is set during the 60s, his grows his hair and beard long, and is no above wearing beads and ponchos. This part of Serpico's character must have been a huge draw for Pacino. But Serpico outsider status is proved time and time again. He sticks out from amongst New York police, and also  in his social life; at a hippy party he attends with a girlfriend, where everyone else are writers, models, actors, etc., Serpico gets muted reactions when he says 'I'm a policeman.'

Serpico is quintessential 70s cinema. It boasts a great acting performance, along with a real story about one man against a huge, corrupt system, a conflict the film approaches with a resigned pessimism. The grainy cinematography adds a level of reality to Serpico's world, like we are watching a gritty documentary. The cinema of the American New Wave delivers yet again.
Posted by Julia Mac at 16:16