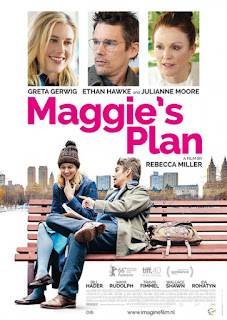 The main character of Miller's film, Maggie Harden, could easily have been really annoying to spend time with. She has her own ideas about how her life, and consequently others' lives, should be led, and plans accordingly. She decides to have a baby using donated sperm from an acquaintance, but finds her plans altered when she falls in love with fellow academic John Harding, a married man. The story then jumps several years in the future, and Maggie is starting to question her decision to live with John, and begins machinations to get him back with his ex-wife.

Maggie, despite being very meddlesome, is also very charming, and this is largely because she is played by Greta Gerwig. Her certainty about her ideas comes across as naivety rather than obnoxiousness, and she does care about the people around her while also being self-centred. Ethan Hawke and Julianne Moore are both wonderful as John and his ex- Georgette; Moore especially revels in her role as the incredibly clever academic whose apparent cold exterior hides a warmth of feeling.

Parts of this reminded me of Jane Austen's Emma, another story about a young woman's certainty clashing with the world, and this is partly why I enjoyed it so much. The script is really good, focusing on a few families and the ways they interact with each other (a formula Austen also stuck to). The small stage allows for some lovely depth to the characters and story. It is funny and sweet, and much more aware of the messiness of romance than most modern rom-coms.
Posted by Julia Mac at 23:58