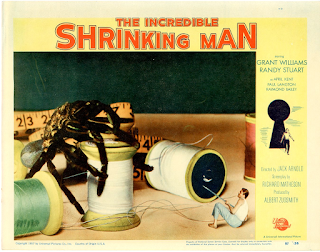 This film is a great example of the ingenuity of pre-CGI special effects. The story is simple; a man, Robert "Scott" Carey, starts to shrink after encountering an unknown gas at sea. The doctors are at first baffled, then once they discover its cause, realise there is nothing they can do. Scott must reconcile himself to his fate. We travel down with him as the furniture gets larger, until a doll's house is his home, and the cat is a danger to his life (along with a tarantula).

This film is a lot bleaker than I thought it would be. Scott becomes depressed at his fate, making him are very realistic character: for some reason I assumed Arnold's film would focus on the action scenes inherent in the story. Instead, the images of Scott sitting a chair that's too big for him, and being stuck in the basement are coloured with his loss of relationship with his wife. We really care about Scott, and see how much of a nightmare his life has become.

The special effects really come into effect in the film's Third Act, where Scott is stuck in the basement of his house, a house his wife is leaving. A minor flooding of the floor becomes almost biblical, and the quest to get at some mouldy cake for food is as dangerous as scaling Mount Everest.

The final reflections of the film are poignant and much more philosophical than I was expecting. It really elevates the film as a whole, reminding us normal sized humans of our places on this earth - surrounded by microscopic organisms - and the universe, where we become infinitesimal ourselves.