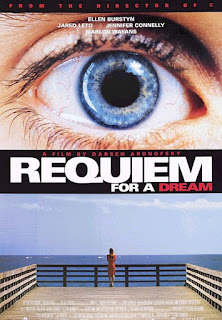 Requiem For a Dream always crops up in conversations about great films you only want to see once, and having watched it, I understand why. Addiction narratives are always intense, and drug addiction stories seem to be particularly overwhelming. Aronofsky's film follows four different characters and their own slavery to their needs: Harry, along with his friend Tyrone and girlfriend Marion are addicted to heroin, while Harry's mother Sara becomes addicted to diet pills (amphetamines).

If the film was just about Harry, Tyrone and Marion it would be a very solid, well-put together story about heroin. But the inclusion of Sara's story elevates this into something even more startling and profound. Ellen Burstyn gives one of the best performances I have ever seen as Sara. She goes from ebing a middle-aged woman trapped in a funk, to a person with dreams and something to live for, only to have those dreams turn into hellish nightmares. Her lack of Oscar award is further proof of the ridiculousness of acting awards (at least she was nominated).

The other really notable part of the film is the editing. Some shots last less than a second, and the effect is to bypass thought and just conjure emotions in the audience. We experience the highs of Marion and Harry's drug-taking, but also the repetitive nature of such need. The film's climax, where the screen cuts frantically from one person to another over and over again, feels like a sickening spiral which we descend down with the characters into their lowest points.

Would I watch Requiem For a Dream again? Maybe, but not for a long, long time. It is very harrowing and hard to forget.
Posted by Julia Mac at 00:24