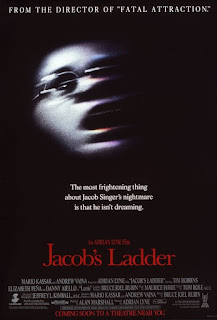 It is hard to know what to say about Jacob's Ladder. Without its inclusion on the 1001+ list, I probably wouldn't have seen it. That would have been a shame, as this is a clever, terrifying, mind-boggling film. It is just so hard to talk about because saying too much may ruin the experience of seeing it cold.

The story moves between two timelines; one in the jungles of Vietnam, where Jacob Singer and his platoon are relaxing when they are suddenly attacked, to the present day, where Jacob lives in Brooklyn, works in a post office, and has seemingly left his family for his girlfriend Jezzie. Strange things start happening to Jacob in the present day; Jezzie gets demonically possessed at a party, but only Jacob notices, car nearly runs him over, and fellow members of his platoon are also experiencing similar horrors. Jacob also sees his deceased son Gabe (an uncredited Macauley Culkin) around as well.

In some ways this reminded me of Guillermo del Toro, though to say why is a bit of a spoiler (so look away if you don't want to know). The demons and devils in Jacob's Ladder are not simply horrible manifestations, but are actually trying to help Jacob come to terms with his fate; they are not the most evil part of this story.

This is a great mind-bender of film that mediates on spirituality and the mind in a very creative way. I can see why it took years for the screenplay to be produced and the film made; the story deals with heavy stuff in a complicated way. But it is worth the investment, and the film deserves to be as widely lauded as other mind-bending films like Mulholland Dr and The Double Lives of Veronique.
Posted by Julia Mac at 00:46