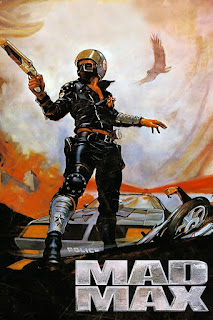 Mel Gibson doesn't get enough credit for his ability to disappear into roles. I had to remind myself that this was the same man who played William Wallace in Braveheart, and Frank Dunne in Gallipoli. While his accent may drift into American occasionally, Gibson's Max Rockatansky is a much quieter role than Wallace, with Max's madness taking a while to fully unleash itself. And when it does, it is a cold rage driven by revenge.

Watching an action film set in the Australia landscape in the rural areas was slightly strange. I am not used to seeing such goings on in leafy green Victoria. Though the budget was clearly low, the thrown together quality adds to the sense of society disintegrating. Nothing is new or shiny, from the cars to the buildings and the clothes.

The story is not new, but its familiarity allows the audience to focus on the action, letting them get swept up in it and not trying to remember how it all fits in. The editing is what really makes this film. From the heart-racing opening chase, we jump from one group to the other, without ever losing the overall arc of the scene. The high cut rate may be very common in action films today, but in the 1970s it would have felt new and exciting.

I decided to watch this series from the beginning, though by all accounts I should skip Thunderdome (I probably won't, but am wary of it), so I am yet to see the recent Fury Road. Mad Max is a great set-up to the dystopian Australia and the story of Max, leaving us at the end with a broken, grieving man who is no longer motivated by law-and-order, but by personal vengeance.
Posted by Julia Mac at 06:01