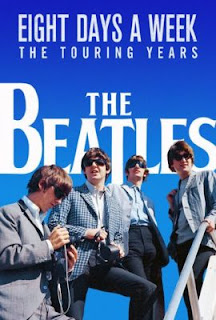 The brilliance of Howard's documentary lies not in the story it tells - the Beatles during their touring years - but how it immerses us in the world of Beatlemania, taking you back to the early 1960s. We get to experience it from both sides, the fans and the Beatles themselves, all presented to us in archival footage and restored audio that reveals the Beatles music from under all the screaming.

As someone who loves the texture of film stock, Howard's film was a joy. Though not all the footage was restored, sometimes distractingly scratchy, it really helps place you in the early 1960s. The cleaned up stock is also lovely to look at. The sound is wonderful, and it is a marvel that the Beatles' live performances sound as good as they do; they couldn't hear themselves, yet they are all in time and tune.

The most enjoyable aspect is the time we get to spend with the Fab Four. They are articulate, charming and very cheeky, their strong friendship evident in the way they talk and muck around with each other. We also see the toll the touring took on them (it really looks like they fit eight days in one week!); Ringo's face when they are in Japan says everything!

I am not a massive Beatles fan, but this documentary gave me a greater appreciation of their music, and their impact on music in the 60s. This is the only film I have seen where no one left during the credits: this of course may have been because of the promised extra footage, but the music and funny banter over the credits was so engaging. See on a big screen with the best sound system available.
Posted by Julia Mac at 17:01