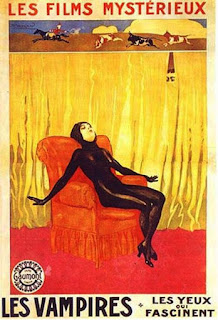 Each month I try to watch at least one silent film, something easily done thanks to YouTube and the public domain. The last few silent films I saw were not on the 1001+ list, and I noticed one of those unseen ones, Les Vampires, is one of the longest on the list. Finding a nice sharp version on YouTube, I settled down to make my way through the story's ten episodes (of varying lengths).

The film's title somewhat misled me; I thought I was in for a horror film of some kind. It wasn't until the second episode that I realised that 'the Vampires' is just a name for a gang who like to murder and steal from the wealthy. So that disappointment didn't help my patience with the film.

The story is very simple; a journalist called Philippe Guerande, assisted by a colleague called Mazamette, is trying to uncover the secret organisation/ gang known as "Les Vampires". It is headed by various Grand Vampires, each one supported by Irma Vep (gee, what could that be an anagram of?), a woman with a perchant for danger and murder. Over six-and-a-half hours we watch people get poisoned by pens, severed heads turn up in boxes, people getting captured from windows through the most hilarious means possible, and secret cannons used to launch surprise attacks.

This all sounds fun, and would be if it were packed into two hours. But everthing takes far too long. Cinema was still very much in its infancy, barely twenty years old, and the idea of compressing time had yet to catch on. Instead of a short few-second shot of someone escaping on a roof, we get the whole minute of them making their way across the roof, then down the drainpipe.

If you are trying to convince someone of the virtues of silent cinema, do not show them this film. Only watch if you want to see how far we've come in terms of editing speeds, or have a spare 6+ hours of time you need to fill. At best, it will certainly make you appreciate the craft of Fritz Lang and Buster Keaton all the more.
Posted by Julia Mac at 18:16