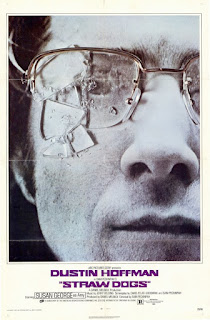 My sister often asks me, after I've watched a film, if I liked it. A surprising number of times my answer is 'this is not a film you enjoy.' Straw Dogs is one of these films. There is a grim sense of dread that hangs over the film's first half, a threat of the violence that is to erupt in the second half. We follow American mathematician David Sumner and his British wife Amy settling into their new life in a small village in Cornwall. The locals are suspicious of David, who is culturally and intellectually different from them, and the local men working on the shed are predatory around Amy, who doesn't think much of it until their cat turns up dead.

While Straw Dogs is classified as a thriller, the film and its story strays into horror territory. The main fears in horror films are about one's house, body, mind, spirit being invaded or penetrated by malignant forces; which is exactly what happens to Amy and David. The infamous rape scene in the film speaks to that fear, though it also plays with our fascination, and even enjoyment of it. Peckinpah received criticism for the scene because of its apparent ambiguity; Amy appears to give into Charlie, and the camera does occasionally eroticise parts of the scene. But Amy's sense of shame, guilt and fear afterwards are clear, and she certainly hates the second part of the rape.

Critics have misread the film for its supposed depiction of men defending their women, and how male machismo saves the day. David's defence of his home is not a revenge on Amy's attackers; she never tells him what happened to her, and David misunderstands her objections to his protection of pedophile Henry Niles. The double standards at play are also clear to the audience; the men who vilely raped Amy are trying to kill Niles for having sex and killing one of the men's daughters (Niles didn't mean to kill the girl, and she initiated the sex; they are really just out for blood).

This is a difficult film to watch, and the descent into murder and madness on both David's and the men's behalfs reminded me of The Hills Have Eyes. Both films are deeply uncomfortable, probing at the violent underbelly of seeming civilised people. But they are also both admirable for these reasons too.
Posted by Julia Mac at 16:22