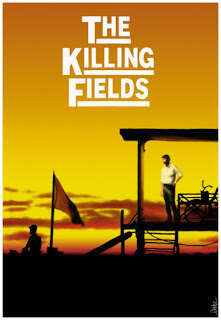 I learnt a little at school about the Khmer Rouge in Modern History, but really only as a sidebar to the Vietnam War. I do remember learning that the numbers killed by the Khmer Rouge was around 2 million, and being disturbed by that, but didn't really know how it all fitted into everything else. Watching Joffe's film was both educational and deeply moving, telling the true story of two journalists, American Sydney Schanberg and Cambodian Dith Pran, two friends who covered the Khmer Rouge takeover, and were separated when Pran was forced to stay behind in Cambodia.

It is often a dangerous thing to learn your history from movies; truths are embelished, parts even fictionalised, and at worst the film becomes propaganda. The best ones give an insight into the experiences of people living through the period. The Killing Fields is one of the best, balancing the drama and the truth beautifully, and is not afraid to ask hard questions of its characters.

The first half is told from Schanberg's perspective, as he and other journalists, local and international, face the threats of the new regime. The second half is Pran's story, living a labour camp and trying his best to hide his previous life. This part was the most powerful and moving of the whole film. In one scene Pran stumbles upon the titular killing fields, swamps of decaying bodies, the victims of the Khmer Rouge. It is graphic, but done in such a quiet way (no dramatic music or cuts) that adds to the horror.

The performances are all good, the two leads especially, and it was fun to see an early role from John Malkovich as a fellow journalist. Sam Waterston is very good as Schanberg, and he and Haing S. Ngor have a great chemistry together; you definitely believe their friendship. The star for me was Ngor, and the only quibble I have with his Oscar win was that it was for 'Supporting Actor,' not as a main; considering half the film is his story, I feel this nomination in this category was probably strategic. Ngor's performance is given greater poignancy because he was also in a camp and had to conceal his intelligence and skills (his was a gynecologist) like Pran. His life is worth reading about (it is incredibly sad), but he was rightly proud of his work on Joffe's film.

This is a great film on so many levels, and I feel it should be more lauded. It moved me more than many other war films, and I really appreciated that it told the story of someone who lived in Cambodia, who clearly loved their country, and had to watch it as it become a very real Hell. It is also a wonderful story of friendship, one that doesn't shy away from its complexity.
Posted by Julia Mac at 22:26