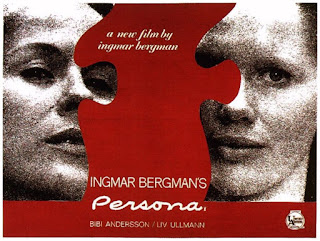 I approach films that appear at the top of 'must-see' lists warily, worried that this 'great' film won't be as great as claimed; at least in my opinion. In the case of Persona this was heightened by the long wait I had to see it. Quickflix said they had the disc, but it sat in the dreaded 'long wait' part of my queue, then was moved to the even worse 'reserve,' which means they may get around to getting another copy some day (but don't hold your breath). Then suddenly the film appeared on a local free streaming site, with only a few days to watch it. After several tries it finally loaded.

Was it worth the wait?
Definitely.

It had been a while since I had seen a film that captured everything I love about film. Persona plays not only with ideas of identity and performance, but even the fact that this is a film, with the famous shot of the film itself appearing to burn up, and the film stumbling to find where it was. This is a film that provokes thought as you try to figure out what is going on, and yet really defies being boiled down into words. It's meaning is slippery, as it constantly reminds us that everything we are seeing is a performance, that the characters of the characters are just personas they had adopted, not real, actual persons.

I've recently been thinking about films shot in black-and-white that would be completely different (and not work as well) in colour. Persona certainly falls into this group. The greyness on the screen makes the melding of Alma and Elisabet's characters more acute, particularly as when a split screen momentarily splices them together.

Trust one of the greats, Bergman, to reignite my love for film, just when I felt I had seen the absolute best film had to offer. Persona moves past Bergman's existential interest in religion, which features heavily in his 1950s movies, into questioning our very sense of self and our projections of those beliefs.
Posted by Julia Mac at 05:03