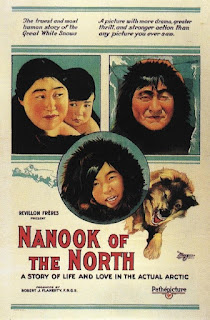 Much has been said about the many inaccuracies of Flaherty's documentary. How the people portrayed really had different names, weren't actually a family, and the practices they perform were already out-dated when Flaherty made the film (amongst other things). It is important to know all this while watching the film so one doesn't watch it thinking this is a slice of real life. And yet the film is still worth watching.

Its importance in film history alone makes it significant. This is one of the earliest surviving documentaries, and rather than someone just going out with a camera and filming what they see, Flaherty had a purpose to his ideas and what he wanted to present. The story of the film, while not as 'real' as Flaherty may show, is still a very engaging one. 'Nanook' (or rather Allakariallak) and his people are portrayed as skilled and intelligent, and their bravery and hardiness in navigating the harsh world of the Arctic is lauded by the film.

For me the biggest draw was the animal life. We see a walrus hunt with real walruses, and watch several men haul in one giantic creature. There are also seals, various birds, and the huskies who pull the sleds. Even when being killed or left outside in the cold, the animals are delightful to watch. The scenery is also wonderful, with from the glaring sunshine on the miles of ice and icebergs, to the blizzard that surrounds the tiny igloo in snow.