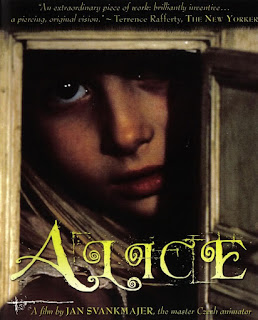 Lewis Carroll's Alice in Wonderland, and its sequel, share a similar status in film to Mary Shelley's Frankenstein and Bram Stoker's Dracula; having been adapted and adapted again, with each generation getting their own version of the story, often one that departs in some way from the original. If people felt that Tim Burton's recent version of the Alice story was too conventional and commercial (which I did), then Svankmajer's film is at the other end of the spectrum. It plays up the darkness and surrealism of Carroll's text, turning an absurd tale into a nightmarish scenario.

Svankmajer reminds his audience throughout the film of the story's origins as a book, with a voiceover instead of dialogue, and abrupt cuts to a close-up of Alice's mouth saying 'said the White Rabbit' or 'said Alice.' While Alice is played  Kristyna Kohoutova in the film, she is the only human, and at times becomes an animated toy like all the rest of the characters, in her case a doll. The scariest creature of all is the White Rabbit. Normally a fluffy buffon, Svankmajer instead created a stuffed rabbit with a hole in his tummy and bulging fake eyes that imply derangement. He spends much of the film trying to refill the sawdust leaking from his body, even at one time eating it with a spoon off the floor.

There are other motifs that appear throughout, including a writing desk, which pops up at different times, waiting for Alice to climb inside its drawer to go to another place, if only she can figure out how to open it; each time something happens, like the knob falling off, to heed her progress.

While clearly low-budget, with washed out lighting, the effects are good for their time, and have that charm that in-camera effects have. Kohoutova is fanastic as Alice, who meets all these strange things with curiosity but without surprise. As a whole, one believes that this is the imagination of a young child at work, one who not afraid to explore dark ideas in her playing. It is strange, unnerving and even horrifying. I really liked it.
Posted by Julia Mac at 22:37