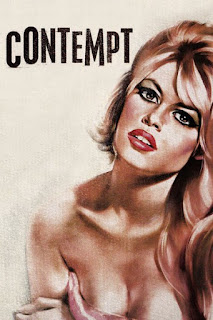 Well, I didn't think it would happen, but I have managed to find a Godard film that I enjoyed; or at least one that didn't leave me feeling completely alienated. Perhaps it's because this is the most conventional film of Godard's I have seen to date. While some things are not explained, the narrative is largely linear, and the editing and shot selections are not as arty, allowing one to get into the story and the characters. The film revolves around a production of Homer's Odyssey to be filmed by legendary director Fritz Lang (played by the actual Lang, maker of Metropolis and M). Michel Piccoli's Paul Javal is asked by Jack Palance's American producer to rewrite the script; he thinks things are getting too arty.

At Contempt's centre lies the mystery of Paul's wife Camille sudden aloofness to her husband. This part of the story could be frustrating, and there are several long scenes where Paul tries to discover the cause of Camille's 'contempt', but she herself can't articulate it (or doesn't want to). I liked that it remained unexplained, as many times one feels emotions, particularly negative ones, for reasons unknown. They may have no cause, or the cause would become negligible if spoken aloud, yet the emotion would still be there.

The rest of the film is a rather wry look at film production, with Jack Palance stealing all of his scenes as the sleazy, uncouth producer Jeremy Prokosch. There is also a lot of Bardot (though less of her clothes), and she is good as maintaining the underlying anger at Paul throughout the film. The third act was when I began to lose some patience with the film, and the ending is a shock. Sadly it feels like Godard didn't know how to finish the story, so just ends it brutally.

I have not be cured of my frustrations with Godard, but this film, about aloofness and contempt, made me feel less so towards its maker. Go figure.
Posted by Julia Mac at 05:18