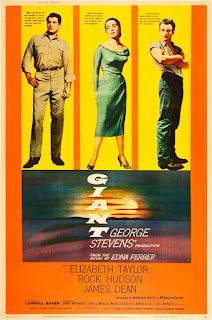 Giant is very much cut from the same mould as Gone With the Wind, but with more oil and a much more complex approach to racism. We follow two generations of the Benedict family, and James Dean's Jett Rink, as they live on a Texan ranch, discovering the oil that will make their fortunes: but will it make them happy? While it doesn't capture the sweeping national changes the way Gone With the Wind does, Giant looks at cultural and social changes in 20th century America, particularly around the treatment of Mexican workers.

The film has dated despite its ideas about racism. Violence is often used as the solution to problems, with concerned women looking on. The story becomes rather meandering, not helped by the over three-hour running time. The main character is not entirely clear, though Rock Hudson's Bick undergoes the most emotional change. Elizabeth Taylor is very good as his wife Leslie, whose more liberal ideas rub against (and eventually off on) Bick, and she handles the aging of her character really well. I was surprised to see she wasn't nominated for an Oscar. James Dean is more of a supporting character, and his storyline is not tied as strongly to the Benedict plot as it should be. His ongoing attraction to Leslie is not quite apparent until the climax. Still, he was an arresting screen presence.

If you like sweeping epics, you will find much to enjoy here. I liked parts, and I always enjoy Elizabeth Taylor on screen. But what felt daring for 1950s America feels soft in today's world.
Posted by Julia Mac at 04:52