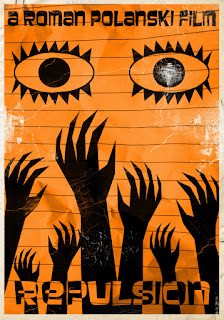 Catherine Deneuve turns up in a lot of celebrated films from the 1960s, and it is not hard to see why directors such as Jacques Demy, Luis Bunuel and Polanski worked with her. Compare her performance in The Young Girls of Rochefort, where she is bright and breezy, with her role as Carol in Repulsion, and you can see the spectrum of her acting range. Here she is contained, her blank face giving tiny glimpses into the tumult of emotions under the surface, as Carol has violent, distressing reactions to the men in her life.

Parts of the film reminded me of Lynch's Eraserhead, another story about a person's repulsive reaction to sex and its consequences. The skinned, rotting rabbit that Carol leaves around her flat recalled the disturbingly deformed child from Lynch's film. The black-and-white cinematography highlights the grunginess of Carol's apartment, and takes us into the dark, shadowy recesses of her mind in the dream sequences.

I tend to like Polanski's film, and this is certainly one of my favourites of his. While cinema is littered with stories about female madness (in fact, it seems to be the state of most female roles in stories throughout history), Deneuve's Carol is one of the quieter descents into madness; even her rape nightmare are soundless.
Posted by Julia Mac at 04:37