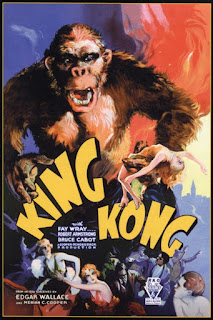 
There is a great deal of charm in the special effects of old films. You can often figure out how they were done, and can occasionally look awkward, but their tangibility feels refreshing after watching so much CGI. It is also important to remember that these effects were the buildings blocks to what we see now. King Kong used its effects to show its 1933 audience creatures, like dinosaurs and a giant ape, on a scale most had never seen before. The modern equivalent is Spielberg's Jurassic Park.

Even if you are immune to the impressiveness of the special effects, the open display of sexuality may surprise you. Fay Wray's Ann Durrow spends a significant part of the film in lacy underwear, and her role on the voyage is essentially to be eye-candy for the camera. She eventually becomes a object of sacrifice as the 'Bride of Kong,' and the ape himself proves susceptible to her physical charms.

King Kong's significance in film history is very clear, and the simplicity of its story aids it cracking pace, packing in as many thrills as possible. It has aged much better than many old CGI films, and has a rather poignant ending, not unlike Frankenstein.
Posted by Julia Mac at 05:10