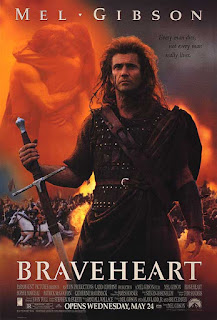 I am always weary of films set in the Middle Ages. I studied this period along with much of its literature at university, and know that most people's engagement with it is largely through its fictional heroes. Perhaps this is why Gibson's film, and Randall Wallace's screenplay, treats the historical William Wallace as an apparently real life Robin Hood. However, this treatment worked to remove all subtlety from the story, and several of writer Wallace's historical rewritings had me saying "Oh come on!"

Really, there is so much inaccurate with this film that I couldn't enjoy it. A few good scenes stood out, the much lauded battle scene at Stirling (with no bridge mind) is still good, and the acting overall is solid. But I kept being distracted by the kilts, which made it look like a 19th century film, and the amount of bare legs also had me wondering why the English didn't wait for hypothermia to kill the Scots. The righteousness of Wallace's campaign, and the devilishness of King Edward I was so black and white it was funny. Some roundedness of character would have been more interesting. Perhaps the biggest issue was the constant cries of 'Freedom!,' which would not have meant the same thing today as it did in the Middle Ages, where feudalism existed for most of the population, and your life was under the protection of your local lord, the court, the king or God, depending on where you were in the social order.

Historical epics are usually a chore anyway, but Braveheart proved too be almost painful, or hilarious, at times. This film works best if you don't know or care about the history, and just want a big action-packed war film, with a little romance thrown in.
Posted by Julia Mac at 17:34