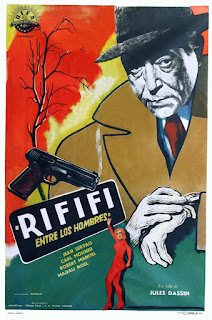 Dassin made this French heist film after being blacklisted in Hollywood by HUAC; and on the strength of this film, all I can say is America's loss was Europe's (and our) gain. While it is hard to call something the 'best' of its type, few heist films are as wonderful as Rififi.

The film takes it time to explain the situation and the characters, allowing us to see their strengths, their flaws, and most importantly, start to care about their fates. The character we spend the most time with is Tony le Stephanois, a recently released criminal who gets drawn into doing another job by his friend Jo. All the planning leads up to one of the most tense and brilliant sequences in cinema it is possible to have. There is no dialogue during the heist itself, amplifying all other sounds, like the hammering on the safe, and the footsteps of police outside the jewellery shop. The film is worth seeing for this part alone, but what happens afterwards, as a group of gangsters realise Tony and his friends are behind the heist, is also fantastic. It all leads up to a poignant ending, achieved through our investment in the characters.

This film is not included in the 1001+ films list, and it really should be. While not significant historically, it uses silence in such a clever way, and feels incredibly cinematic. The cinematography captures this unglamourous yet engaging side of Parisian life, and the story's pacing, which subtlely draws you into this worlf, is testament to Dassin's skill as a director.
Posted by Julia Mac at 21:09