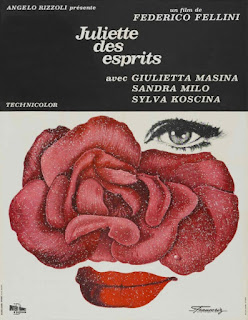 For a film about shallow people having arguably shallow experiences, it is appropriate my first response to the film was a shallow one. On the surface, Juliet is an arresting film. Having only seen Fellini's black-and-white films previously, the barrage of colour in this is staggering. Sets, locations and costumes are as bright as Hollywood Technicolor, with great pieces of coloured fabrics lining the walls of houses. The costumes are glorious, exaggerated in their finery, helping to create this heightened world we are in. Excess is the idea and even the lifestyle of several characters, and the look of the film captures this beautifully.

But what is the film about? In essence, a women dealing with her husband's adultery. She does this by looking internally, hence the heightened realism of the film, and looking at the behaviour of her free living neighbour Suzy. The story doesn't offer any real answers to Juliet's dilemma, except suggesting that her husband's infidelity is her fault (!), and that maybe Juliet should just relax and forget it, have her own affairs, whatever. The cruelty of this attitude is made worse knowing that Juliet is played by Giulietta Masina, Fellini's wife, who likewise had to deal with Fellini's philandering.

The ambiguous ending has been argued over by Fellini and Masina, and the audience too is left to decide what Juliet does at the end. Is she mad? Has she choosen 'freedom'? Do you even care?

I didn't think too much about the underlying meaning of the story as I concerntrated more on the film's look. For that, it is worth seeing. But the story is meandering, and the characters lack some depth, except for Juliet herself. And the ideas about aging and beauty are very chauvinistic.
Posted by Julia Mac at 04:50