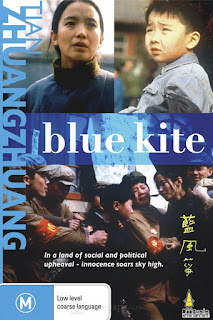 The Blue Kite is a perfect example of why I enjoy watching 'world' films. I know very little of Chinese history, only that Mao's Communist Party took over mid-20th century. While Zhuangzhuang's film does not give an exact history of this takeover, it gives us a great insight into the impact this had on Chinese society, on a practical day-to-day level, and the emotional effect it also had on families. The story follows Tietou and his mother Chen as they try to make their way through this new world of strict party conformity in the absence of a patriarch.

The film is divided into three sections, the first named after Tietou's biological father, then his "Uncle" Li and then his Stepfather. We watch the tight, happy family unit slowly collapse as Tietou's father is betrayed, his 'Uncle's health fails, and his cold Stepfather try to save Tietou and his mother from the might of the Cultural Revolution.

There is a quiet tension to the story that becomes more prominent as Tietou grows up and realises what is happening around him. While the story is structured around Tietou's father figures, his mother Chen is strong presence throughout as she tries to keep her son safe. Liping Lu is fantastic as Chen, her youthful happiness giving way to despair.

The Blue Kite proved controversial in China and was banned. It is not loud in its damning of the spread of Communism in China, but its quiet power and emotive storytelling speaks volumes.