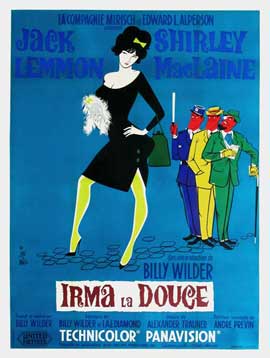 I have previously said that I haven't yet seen a Wilder film I didn't like. After watching Irma la Douce, that is still true; I did enjoy this. However, it is Wilder-lite, with less of the unsettling comedy of Some Like It Hot or The Major and the Minor, and mainly on the screwball/ farce aspect. I love Jack Lemmon, so watching him on screen is always a joy. He and MacLaine have good chemistry like they did in The Apartment.

The story is deliberately complicated. I was slightly surprised how much more overt in its sexuality than other Wilder films; in The Apartment, the more secretive approach makes the subject more dirtier (for want of a better word). There were a few nods to Some Like It Hot, including some of 'Sweet Sue's Society Syncopators' playing Irma's fellow prostitutes.

This was enjoyable fluff. I wouldn't recommend it as an example of Wilder's brilliance as a director, but for a couple of hours, it is good fun.
Posted by Julia Mac at 20:06