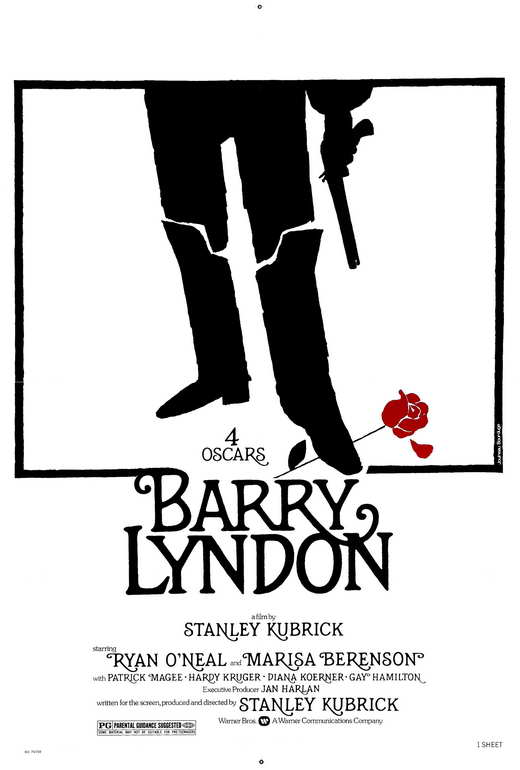 There are few films that are as beautiful as Barry Lyndon. Every scene, every single frame of the film is quite breathtaking. Kubrick's use of light in this film is famous; he had special lenses developed to capture the candle light, and though some artifical lighting was used, it was to help bolster the outside light from the sun. As a result the interior and exterior spaces feel different to how they do in most period dramas, where everything feels exposed so that the sets and costumes are shown off. That being said, the costumes are wonderful, from Lady Lyndon's opulent frocks, to the bright red dress of the soldiers. Kubrick's love of classical music comes into its own here; it is expertly used, with various versions of Handel's Sarabande used throughout. All in all of I felt like was watching the 18th century through its own lense, rather than with a modern sensibility.

However (you knew it was coming), all this beauty cannot hide the lack of emotion I felt watching this. Awe was present throughout, but I felt no great humour or pain or anger or sadness. There was moments; when Redmond Barry steals the horse from a senior officer (who seems to be having a romantic moment with a fellow soldier) raised a smile. Apart from that I was largely untouched by the story itself.

The story is from William Makepeace Thackeray's The Luck of Barry Lyndon which imitates 18th century novels like Fielding's The History of Tom Jones, A Foundling and Defoe's Moll Flanders. Those stories are told with a certain amount of humour, either by the omnipresent but intrusive author, or the main character herself. I have not read Thackeray's novel, but think that the first person narration may have worked better in the film than the omniscent and judgemental narrator. Redmond Barry Lyndon's character is rather blank in the film; if he had narrated his own story I would have understood his character a bit more. Perhaps Kubrick thought he had done that in A Clockwork Orange and didn't wish to repeat himself.

I cannot say if I think this is a successful Kubrick film or not. The lack of emotion is a big problem, as I like to care or at least be interested in characters. I was interested in Alex DeLarge in Clockwork, and he arguably does worse things than Barry Lyndon does. However, the film's breathtaking visuals are (just) worth the three hour length. I always feel I learn something about filmmaking when I watch Kubrick, and I certainly did here. If you love Kubrick, or enjoy poring over art works for hours, then you should like this. If not, you might struggle after the first hour.
Posted by Julia Mac at 21:55