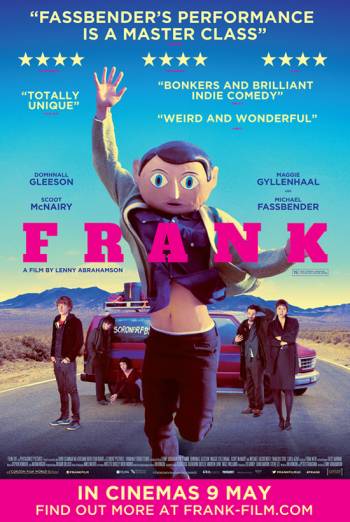 In Australia, October is the month of Mental Health Week, a time to raise awareness and support for people living with mental illness. Frank is a highly appropriate film to review now, as many of its characters have experienced mental illness, and during the film, try to live in world they feel uncomfortable in.

I love both Maggie Gyllanhaal and Michael Fassbender, so I was looking forward to seeing this. I will say that the film was not quite what I expected, and I think I will need another viewing to fully appreciate everything it did. However, I did enjoy it. All the cast are very good, with Fassbender giving one of the most interesting performances I have seen in a while; and considering the paper-mache mask obscuring his face, that is saying something.

The musical is of an aquired taste, but the way Fassbender sang the lyrics was fantastic, particularly the last song, which was vulnerable and gentle. Lest everything I have said makes the film sound depressing, it is not. It has many moments of humour; the opening scene of Domhnall Gleeson's Jon trying to think of lyrics and music is a hoot. Definitely worth seeing more than once to truly understand world of Soronprfbs (the band).
Posted by Julia Mac at 04:37