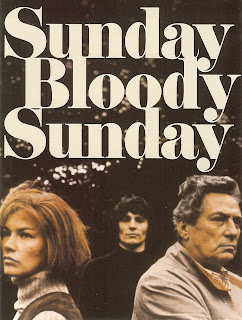 There is no denying the strength of the performances in Schlesinger's film, particularly Peter Finch and Glenda Jackson. Their characters are two sides of a love triangle, the intersecting point being Murray Head's Bob, a self-centred modern artist who flits between the two, taking their attention while not giving them the same in return. The story follows a crisis their relationships as Bob wants to leave England for the US.

In terms of plot, Schlesinger's film is almost without a strong through-line; it is more a reflection on the situation in these people's lives. Of the three, Finch's Dr Daniel Hirsh is the most interesting and sympathetic character. He is Jewish and gay (though his family don't know), but there is no anxiety or even comment on this fact, except in a scene at a Jewish wedding where some well-meaning women try to set Daniel up. This approach to homosexuality would have been a shock for 1971 (I imagine - I was not alive!), and one could see this plot in a film today barely raising an eyebrow.

This film falls into the 'I admired it, but didn't like it' category for me, and it is largely for the performances. I didn't particularly like any of them other than Daniel, and didn't care about their situation. I was more moved by Schlesinger's Midnight Cowboy.
Posted by Julia Mac at 23:21