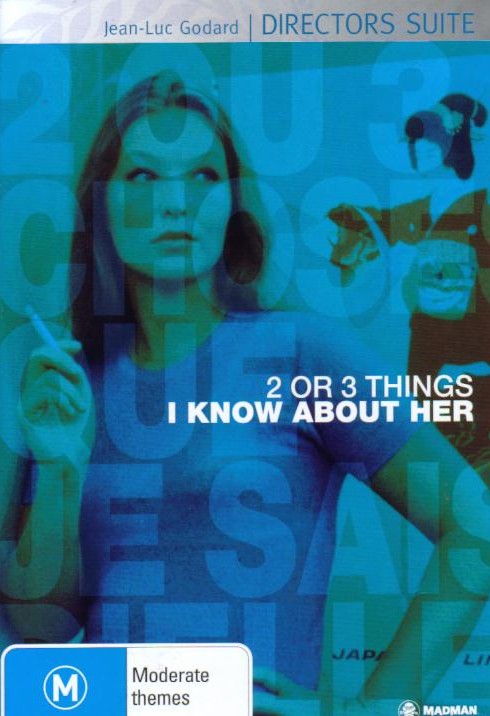 Ah, another Nouvelle Vague film! I watch these out of a sense of duty than any real feeling of enjoyment. I know they are historically important, marking a new approach to filmmaking, breaking all kinds of rules, playing with the form; and that is great. But really, I like the films these films influenced, particularly those from America, absorbing the new techniques and attitudes into traditional filmmaking.

The film is presented like a documentary, following a day in the life of Juliette Jeanson, a nice bourgeois married mother who dabbles in prostitution on side, in between shopping for clothes and doing the dishes. However, the artificiality of everything we see is clear from the outset, as Godard in voice-over introduces us to the character ('This is Juliette...') after introducing us to Marina, the actress who plays her. He uses the same description for each, but changes the camera angle slightly for each shot. Amongst the depictions of Juliette's daily life are scenes of building with carefully arranged brightly coloured packaged food and household groceries. There are also scenes with people in the background whose lives we learn a little bit about through monologues delivered to camera.

What does it all mean? I am not sure, and to be honest I am not really motivated to probe further. There are certainly moments of humour, particularly the scene with the American man who wants Juliette and another prostitute to wear aeroplane bags over their heads. Other than that this is mainly of interest to those who are Nouvelle Vague enthusiasts, or film history completist (guess which category I fall into).
Posted by Julia Mac at 06:49