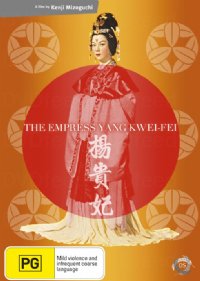 This is the second Mizoguchi film I have seen, and while is it not as powerful as Sansho the Bailiff, it has a similar interest in the plight of women, and their role in society. As many of my favourite novels are on this topic, I knew I would enjoy this film.

Princess Yang Kwai-Fei focuses on the goings-on of Emperor Xuan Zong's court, where the Emperor is grieving over the death of his beloved wife. The court is secretly scouting for a new consort for the king, and find her in the shape of Yang Kwai-Fei, a servant and distant relative of the powerful Yang family. The plan works, and the Emperor and Kwai-Fei fall in love, but an up-rising happens when the Yang family begin to exert too much power.

Though not an essential film to watch, Mizoguchi's film is a sweet and sad story which recalls Cinderella in its premise, and the darker versions of Western fairytales (where sacrifice and death are central to the plot).
Posted by Julia Mac at 21:55