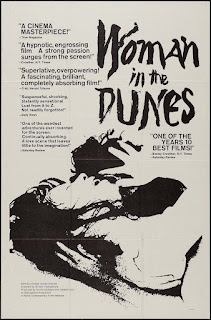 Few stories are so simple, yet so strange as Teshigahara's film. It follows a schoolteacher who finds himself living in a house at the bottom of a sand dune valley with a woman whose job is to keep her house safe from the encroaching sand. From this intriguing and Sisyphusian scenario, we get a fable that is lyrical and surprisingly sensual.

The sand of the dunes is a main character in the film. There are close-ups shots of granules of sand tumbling over each other, this silent presence slowly inching closer. It also gets everywhere, even when the characters lie down inside the house. It informs every act the couple do each day, and even aids in consummating their relationship. The black and white cinematography strips the sand of its yellow-white colour, making it feel even more dry, and almost like Niki and The Woman are on another planet. When water does appear, its dark stain stands out in this pale grey landscape.

It is hard to say a great deal about the film because its plot largely occurs in the heart of its main character Niki, whose desire to escape this strange gaol changes as he and The Woman start a sexual relationship, and his own ingenuity is rewarded.

The quietness of the camera's approach to its subject reminded me of Ozu's work, but really,  Teshigahara's film is very singular. I didn't know what to think of it for the first few minutes, but by the end, the film had drawn me into its world of sand, sex, and seclusion. Further proof, as if it were needed, of the brilliance of Japanese cinema.
Posted by Julia Mac at 03:58