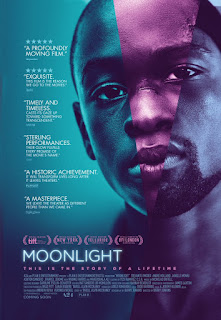 After its win at the Oscars last weekend, my local cinema finally decided to show 2016's Best Picture. Naturally I went, wanting both to support the film (and the cinema's decision to show it), and of course, to see what all the praise was for.

This is one of the most quiet films ever to be nominated for an Oscar, let alone to win the award. And this quietness gives the film its immense power. There is not exactly a story, more of a snapshot, or three, of the life of Chiron, a young black boy, then man, living in Liberty City, Florida with his drug addicted mother. He gets taken under the wing of drug dealer Juan as a young boy; has a deep and tender moment with his friend Kevin as a teenager, only to have his heart broken in a brutal way; and then as an adult, he confronts this painful, confusing episode from his past.

I am being deliberately vague, because this is a film to just let wash over you, like the water that makes an appearance frequently throughout the film. Chiron is one of the quietest character I have seen on film for a while, and I am not surprised that the more dialogue-heavy performances of Mahershala Ali as Juan and Naomi Harris as his mum were nominated (they are also fantastic as well). The three actors who play Chiron wonderfully portray the confusion, pain and desire that swell within him. Their performances also all meld together to create one character.

Moonlight is a film that grows on you, the depth of its emotions masked by the restraint of the filmmaking and performances. It is very beautiful, and very quiet in a way that requires you to pay attention and listen to it carefully. I loved it, but it took time for my feelings about it to settle. The story touches on other stories we have seen before - about being black, bullied, a drug dealer, or gay - and yet it approaches these things with a depth I haven't seen before. It is about coming to terms with who you are when choices seem limited, and accepting parts about yourself you can't change.
Posted by Julia Mac at 23:24