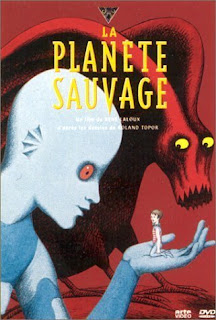 Laloux's animated science-fiction film is certainly of its time. Not in its story: an alien planet ruled by giant blue humanoids called Draags, who keep humans as pets (Oms), is used as an allegory for the dehumanising way humans treat one another - something common to much sci-fi. No, what really places Fantastic Planet in the early 70s is the eerie music, visuals, and the stilted, slow pace of the dialogue.

The copy I watched was an English dub from the original French, but also had subtitles which I couldn't turn off. The words spoken, and the words on screen, did not always match up - usually they were phrased differently. This made an already trippy film even more strange.

The animation is not like the bright colours we see in mainstream animation - this is not Disney, Pixar or Studio Ghibli. There is a flatness to the visuals as well. However, the opening scene really captures the scale of the world of the Draags. We follow a naked mother carrying her baby as she runs terrified from something unseen. Suddenly some large blue hands enter the frame and play with her like she is a mouse. When she dies, the hands pick up the baby, and then we see the hugeness of the Draags (and these are only the children) compared to the Oms.

From there we spend the first part of the film learning about the Draags world as the young Om Terr grows up - each Draag week is equal to a human year, so Terr quickly grows older than his child-captor. Terr learns the secrets of the Draags' knowledge under the Draags' noses - they believe Oms are too stupid to learn anything. The story eventually kicks in as Terr escapes and encourages other Oms to revolt. They learn about how humans got to the planet Ygam, and exactly what Draags do when they meditate (one of the weirdest scenes in the whole film).

This animation is not for children as it deals with some rather adult ideas, and its visuals are way more abstract than mainstream animation. The allegory is not subtle, but the skill of the images, particularly the attention to scale, and the disquieting music, are the reasons to see the film.
Posted by Julia Mac at 04:51