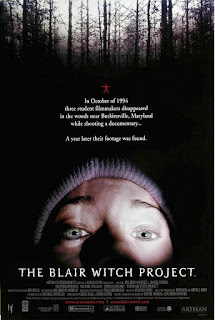 I wonder if time has been a bit unfair to The Blair Witch Project. Modern teen horror films seem to be full of jump-scares, including the found-footage sub-genre that Blair Witch made popular. By contrast, Myrick and Sanchez's movie now looks like a slow-burner, like The Witch. While unsettling things start happening once the three characters are in the woods, we don't see the people/creatures that are tracking the young people, only the evidence they leave behind.

I actually liked this approach. While watching sudden attacks by horrifying can be frightening, but there is something deeply creepy about waking up in a spot and finding its been silently decorated with effigies, or a sample of your missing friend's DNA. The three young filmmakers felt like real people, and their mood swings that affect their dynamic work well. They aren't the greatest people to hang with, but hey, horror films usually don't have likeable at their centre.

Time, and the internet, may have altered how this film is received, but I can imagine very young teens, watching this as their first horror film would be creeped out. And as someone alive in the 90s, I felt a slight fondness for the crappy video quality of the kids footage.
Posted by Julia Mac at 04:31