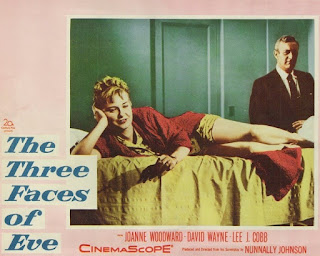 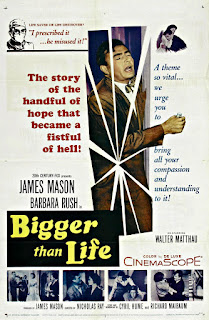 Films often gets accused of using mental illness in negative or frivolous ways: Split (which I have not seen) is a recent example. Ray and Johnson's films buck this trend, portraying the effect on the sufferer and their family very seriously. In Bigger Than Life, James Mason plays a school teacher who undergoes a personality change, a severe side-effect of a new, experimental medication. Johnson's Three Faces tells the real story of Chris Costner Sizemore, here called 'Eve,' who had dissociative identity disorder.

Mason as Ed Avery and Joanna Woodward as Eve White are both fantastic in their roles. Mason paces Avery's descent beautifully. Avery starts to lose his compassion, treating his son harshly, culminating in a horrible rejection of his family. Barbara Rush is also great as Avery's wife, watching her husband disappear. The colour cinematography adds an intensity to Avery and his family's world, and shadows are used to great effect.

Woodward's role requires her to change character quickly, often within a scene. At the film's beginning she is quiet and harried, and calls herself Eve White. During a visit to a psychologist, another personality, Eve Black, emerges. Black is the polar opposite to White: flirty and outgoing. Later, a third Eve arrives, who is much more balanced in her moods. As the film goes on we follow the investigation into what triggered Eve's personality split. Johnson filmed in black-and-white, subtly evoking the varying names of Eve. It also makes us focus on Woodward's face, watching the way her body language changes.

Both these films are slightly constrained by censorship at the time - these days a they would likely have darker films. However, Bigger and Eve approach their story and characters with a great deal of humanity, and don't shy away from the pain and horror mental illness creates.

If you want to make an informal trilogy, watch along with The Snake Pit (1948), which takes you into the institutions where Eve or Avery could have ended up.
Posted by Julia Mac at 04:44