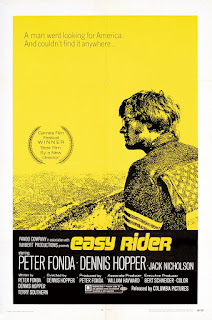 I wasn't expecting to like Easy Rider; I don't usually find films about intoxication, whether drugs or alcohol, where the characters are having their own type of fun, enjoyable. But Hopper's film is about more than a couple of bikers drinking, smoking and road tripping. It captures a period of America, where the generation split was large, and the divide between small-town people and hippies was wide.

There is not much plot to speak of, and at one point we go into the drug-induced mind of the characters, where time is elliptical. The two bikers are joined by a third man on their journey, whose story adds a good of melancholy to the film, and displays the gentle humanity of Wyatt and Billy.

It is hard to say much more about Easy Rider, other than what everybody says when they see it: it has a cracking music score, which helps leviate the film. Hopper gives us a glimpse into a short-lived but very influential time in America's history, where the old life as many knew it had changed, the world lurching into modern life.
Posted by Julia Mac at 19:49