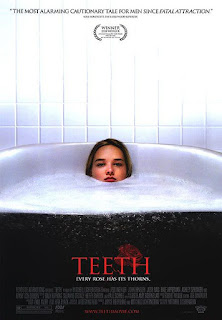 Teeth is a horror film that manages to be both hilarious and horrifying at the same time. How could you not giggle at the image of a male doctor's hand stuck inside a teenage girl's vagina, as well as recoil in discomfort at both their pain as they struggle to extricate themselves?

Jess Weixler is fantastic as Dawn, a young woman who discovers a spare set of teeth on her body in an unorthodox spot. They make themselves known when Dawn's crush decides to force himself on her, and her body takes revenge. The film is very clever, showing Dawn's own fear at her unknown power, before she comes to appreciate its value. For men, this is the stuff of nightmares.

The film explores the fears (American, religious fears) around female sexuality. Dawn is a speaker for a purity group, encouraging people to make public pledges to wait until marriage. She has been taught to fear her own feelings about boys, as well as the act itself. The horror of rape is flipped on its head in this film: Dawn's crush finds his desire for sex is not tolerated by Dawn's body.

Lichtenstein has taken a feminist viewpoint with this film: one could make a film about the same idea, but make it entirely about men's fear of women's sexual power. Instead, we care about Dawn, sharing her fear as she gets forced into sex, treated patronisingly by a doctor and by a classmate, who really should have known better. And we cringe in anticipation as Dawn decides to punish her awful step-brother (who looks like Sid from Toy Story all grown up).

Teeth is clever, funny and horrifying. It doesn't punish the sexually promiscious girl, like many a teen horror film, and pushes the horror of rape onto men.
Posted by Julia Mac at 14:52