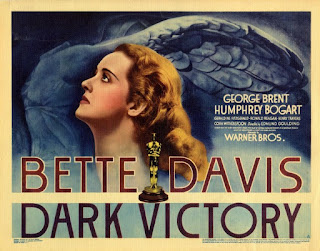 1939 really was a great year for films. Though Dark Victory is not in the same realms of cultural significance as Gone With the Wind, The Wizard of Oz or Mr Smith Goes to Washington, its well-acted, moving story is yet further proof of the talent that existed in late 30s Hollywood.

Dark Victory is a woman's picture about Judith Traherne, a young socialite who discovers a tumour on her brain. Defiant that nothing is wrong with her at first, Judith eventually begins treatment for her illness, and falls in love with her doctor. The title refers to the film's rather moving ending: Judith cannot be cured, and the signal that her life is about to end will be her sight going - everything going dark.

One thing that I really liked about the film was Judith's relationship to Ann, her secretary and her best friend. While the romantic storyline is given more emphasis, the women's friendship moved me the most. It is Ann who convinces Judith to see the doctor, and their last scene together is arguably the sadest in the film.

Bette Davis is, always, wonderful as Judith. The character undergoes several emotional upheavals, and Davis gives them nuance, especially after discovering her terminal prognosis (which knowledge she must keep secret). The intrigue around Judith not knowing or knowing the truth of her condition feels too melodramatic at times, though such things did happen, and it does add poignancy to the final scenes.

I don't generally cry in films, and didn't in this one, but for others this will definitely be a weepy. Davis may suffer from Ali McGraw's disease, but the love and care that surrounds Judith, and her knowledge of this, is what gives the film heart.
Posted by Julia Mac at 23:30