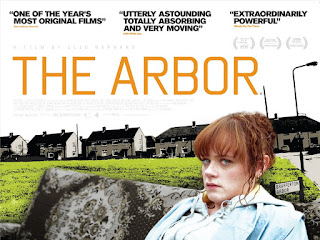 Barnard's documentary follows the life of playwright Andrea Dunbar, who grew up in Bradford, West Yorkshire in England's north. She rose to fame in the 1980s with her first play The Arbor, an autobiographical play about growing up on a council estate. Scenes from this play are performed throughout the documentary, on sets on the real council estate in Bradford. If that doesn't sound meta enough for you, just wait. The majority of the documentary is about Dunbar's life, and her children, told through the memories of her three children, particularly through her first daughter Lorraine, who had an Asian father.

The point of difference with most talking head documentaries is that here the voices of Dunbar's real child are lip-synced by actors playing them. On paper, this sounds dreadful, but Barnard gets such wonderfully understated performances from her actors, that it took me a while to remember this device.

I won't detail the story that unfolds about the lives of Dunbar and her grown-up children. It is not a happy one, and the shock of some of the revelations make them very poignant. Barnard explores how poverty and even neglect affects each generation, forming a horrible vicious circle. For something that could feel very theatrical, the film is actually very cinematic, partly through the use of real council estates, and the subtle acting in close-ups.

I would highly recommend this, if you can find it. Barnard is one of the best modern British filmmakers, though her work is not seen, or shown, widely enough. Her films are full of compassion for people; there is no judgement cast. Instead we see a full depiction of all sides of the story, which only works to highlight the tragedy of their situations.
Posted by Julia Mac at 23:11