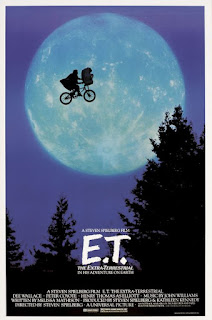 2016 saw me plug several large holes in my movie viewing. One of these was E.T., which it has taken me twenty-six years to see. Why, you may ask, did my childhood not include this landmark family film? Errrr... I will blame my parents (who did show me Star Wars at age seven, so go figure). I do wonder how I would have responded to it if I had been younger; in all honesty, I probably wouldn't have enjoyed it as much as I did seeing it as an adult. E.T. would have scared me as a child, but now I can appreciate his adorableness.

Spielberg knows how to balance entertainment and emotion in his films. Almost all of them have a moment of wonder, a scene that excites you but also moves the story on. That moment in E.T. is the flying bicycle across the moon, which naturally is the movie poster. It is still one of the most iconic shots in film history, and beautifully captures the film's themes of adventure in your own backyard, and the power of friendship.

The child actors in the film are all well cast, especially Henry Thomas as Elliott and Drew Barrymore as Gertie. Thomas has to give a performance of great emotional depth, and his scene at E.T. deathbed is something a few adult actors would struggle with. He handles it wonderfully.


Aspects of this reminded me of the way Pixar approaches films supposedly aimed at children. Both Pixar and Spielberg take the lives and emotions of children seriously, and trust them to cope with the sadder parts of life, like loss of loved ones. They also choose to see the world from the eyes of a child: a place of both wonderful things to discover, and fears to overcome.
Posted by Julia Mac at 22:12