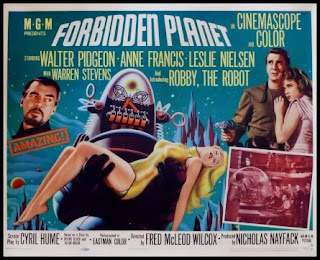 Pre-moon landing films have a different feel to more modern films. The images of men walking on the moon, or even seeing the earth from space were not yet part of modern culture. Filmmakers' imaginations roamed a little more freely. Special effects in these old films have a particular charm to them; these days you have the fall back of doing things in post-production if required, and some in the audience just think "That was done with CGI."

Couple these special effects with a clever adaptation of Shakespeare's The Tempest, a wise-cracking robot, a thoroughly modern electronic score, and with a plot that is much more about humanity than aliens than you might think, and you have one of the best science-fiction films of the 1950s, and of the genre in general.

Seeing Leslie Nielsen being both young and serious was a slight obstacle at first - and in some of the more sexist 50s scenes with Anne Francis' Alta I half hoped for a wisecrack just to cut through my  discomfort - but he is great as Commander Adams. He and his crew land on Altair IV and find the environment is the least hostile part of planet.

The sexism is what dates this film. Alta is portrayed as naive, not realising her self-designed clothes are making the earth-men uncomfortable; or that her physical interest in these men is unladylike. The male audience of the 1950s got to have it both ways: look at a pretty girl, and see her get reprimanded for being too showy. This, however, is the only negative things about this film. Forbidden Planet goes to some very dark places about the human subconscious and the way technology may one day interact with our thoughts.
Posted by Julia Mac at 22:49