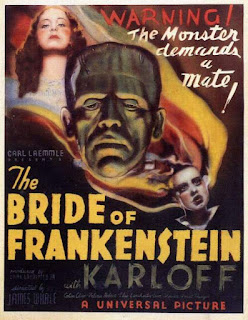 People who say that Hollywood has become addicted to sequels of late clearly doesn't know their film history. Hollywood has always gone after the money if they see an opportunity to do so. And much like today's industry, the sequels are occasionally equal to or better than the original film. Considering the strength of the first film, this is saying something.

The Monster has always been a sympathetic character in all the tellings; the Mary Shelley's novel is even narrated by the Monster for sections (the scenario where the original story was written is alluded to at the film's start). Even when he kills people, we still understand his motivations, and care about him. Throughout The Bride we see the Monster naturally wanting a mate. This is nicely doubled with Henry Frankenstein's relationship with fiance Elizabeth. The most monstrous character of the film is Dr Pretorius, who wishes to continue Frankenstein's work.

The most iconic image of this film comes right at the end, that of the newly created Bride. She stands there in all her glory, both beautiful and terrible. It is a striking moment, though knowing Young Frankenstein as well as I do, I couldn't help but smile, remembering Madeleine Kahn's tribute to this scene. The film's ending is just as melancholic as you would want from a Frankenstein film.