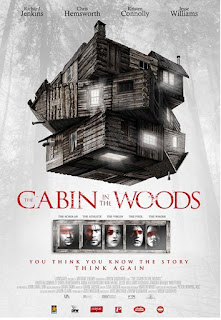 I put off watching The Cabin in the Woods until I felt I had seen enough horror films to give me context for the film's plot, and most of its jokes. I am glad I did, for while I knew of some of the horror tropes referenced in the story - the cliches about the group dynamics was one - the depth of the film's horror knowledge would have escaped me.

The Cabin in the Woods' plot is a very clever explanation for the abounding cliches or tropes in many horror films, from the isolated locations to the last-girl-standing. The beginning has two branches of the story: one the familiar group of young people off on a dubious holiday in the woods, the other shows a military-looking office of people monitoring the group's activities, and eventually influencing their behaviour. While we quickly realise what the office-bound group is doing, we don't know why.

Like so many parodic films that are fond of their subject matter, The Cabin in the Woods is both funny and genuinely scary, much like The Princess Bride is also romantic and swashbuckling, and Young Frankenstein occasionally melancholic. The deaths of the young people are gruesome and ridiculous; you recoil as you laugh. The climax is a boon for horror geeks (which I am not quite yet), warranting a re-watch just to catch all the references.

Good parody is hard to do, especially of horror, as the line between scary and silly is a fine one. The Cabin in the Woods works because of its clever writing, both of dialogue and narrative structure, something that is also true for that other great horror parody Scream. If your audience comes out from the film having laugh, screamed (or gasped) and with a smug smile of recognition at the film references, you know you've succeeded.
Posted by Julia Mac at 21:36