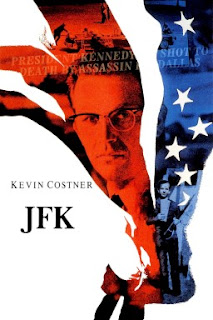 Outrage is at the heart of Stone's film about JFK's assassination: outrage and disbelief over the fact that we still don't know why it was done, or by whom exactly. JFK doesn't seek to give us answers, and really leaves you feeling overwhelmed at all the 'facts' and supposition around that fateful day in Dallas.

This makes a strange double bill with Pablo Larrain's Jackie, which I saw a few days before watching Stone's film. Larrain's film grounds the event in personal grief, as well as reflecting on how to create a legacy for a president who served just under three of his term. Stone's film focuses on all the speculation and conspiracy theories surrounding the assassination. We follow Jim Garrison, who become obsessed with discovering the truth, and spent years amassing as much detail about the day, seemlingly talking to anyone who had a theory about what happened.

Kevin Costner is very good as Garrison, and he must have salivated at the almost ten minute speech Garrison delivers in the court room at the film's climax. The rest of the cast is top-notch, with characters that only have one or two scenes in this almost three-hour film making an impact. Donald Sutherland's government man, known as X, is one such 'cameo.' The recreations of the period are good, with Stone mixing reconstruction with the famous Zapruder footage (which is still hard to watch, as you know it is real footage of a man being killed).

This is a film to admire for its scope and attention to detail. However, I don't think I would watch it again anytime soon. While I certainly agree with Stone's frustration at the lack of culpability for what was one of the most famous (and public) murders of the 20th century, I felt much more moved by Larrain's film, which reminded the audience that not only was a president killed that day, but someone's father and husband.